Responding to COVID-19 with the border we have: Christopher Sands in the Hill Times 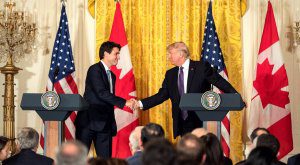 There will be a lot to learn from the policy experiment we are all living with because of COVID-19. The U.S.-Canada border has been managed co-operatively and well, but we have room to experiment and innovate, writes Christopher Sands.

The COVID-19 pandemic has driven policy change as dramatically as the September 11, 2001, terrorist attacks on the United States did. And in both cases, the U.S.-Canada border has been a focal point.

On March 18, in response to predictions of a rapid spread of this coronavirus strain, the United States and Canada jointly announced a 30-day restriction of border traffic to essential transit only. After a series of unilateral border closures imposed by the Trump administration on China and the European Union, Canada was treated as a partner, and the border was restricted, not closed.

Truck traffic at the Detroit-Windsor and Buffalo-Fort Erie crossings continued at 80 to 85 per cent of normal levels, and cross-border supply chains continued to operate. In April, Washington, Ottawa, and Mexico City announced a 30-day extension of the restrictions, and have since extended them again into late June.

The COVID-19 border co-operation story is not a perfect one. A week after the restriction was announced, Prime Minister Justin Trudeau went before media cameras to warn the Trump administration against a rumoured deployment of U.S. troops to the Canadian border. In fact, the option of deploying the U.S. National Guard to patrol remote areas between border crossings was considered to help Canada deal with irregular border crossers trying to exploit a loophole in the 2005 U.S.-Canada Safe Third Country Agreement. Canada had been asking for the loophole to be closed for months. Trudeau could have learned this with a phone call. President Donald Trump quietly dropped the proposal and a temporary fix to the agreement was worked out.

Then on April 6, news broke that Minnesota-based 3M was under pressure from the Trump administration to stop all exports of personal protective equipment (PPE) until U.S. needs were met. Behind the pressure was a threat to invoke federal authority under the Defense Production Act of 1950 to seize control of 3M’s manufacturing facilities for the duration of the crisis. Canadians were shocked.

What happened? Congress passed the Defense Production Act to mobilize private sector resources in a national emergency. In a natural disaster or pandemic, the Department of Homeland Security (DHS), and specifically the Federal Emergency Management Agency within DHS, can use this authority to get a beer bottler to bottle potable water after a hurricane. And most of the time, in a natural disaster, FEMA doesn’t need to threaten firms, just to ask.

FEMA quickly clarified that PPE, medical devices, and medicines intended for use in Canada and Mexico were exempt from any export restrictions. They even entered this exclusion into formal rule-making.

George Washington once said that you go to war with the army you have. In a crisis, governments fall back on familiar policy tools before they can think to build new tools or institutions. The joint border restrictions relied on years of hard work by officials to enhance border co-operation and data sharing, much of it in response to 9/11.

There is one set of existing tools that Washington and Ottawa could still use to make the border work better for both countries during this pandemic and any future ones: trusted shipper and trusted traveler programs.

After 9/11, the United States set up the Customs-Trade Partnership Against Terrorism and Canada had a similar program, Partners in Protection. Both were streamlined to work together better as part of the Free and Secure Trade (FAST) initiative. These programs give companies the option to secure their loading docks, materials handling, and logistics at their own expense and become “trusted shippers” in a time of crisis. Similarly, many individuals who cross the border frequently have joined NEXUS, a trusted-traveler program. By volunteering data and meeting high standards, the government can expedite inspections and make crossing the border easier.

Why not add an option to test for COVID-19 and adopt sanitary workplace and equipment standards under FAST and NEXUS? Firms and individuals who did so would be a lower risk at border crossings and could be deemed “essential” during restricted border policies. In addition to providing companies with a greater return on investment from their participation in these programs, this would allow Canadians and Americans a less confusing way to figure out how they can cross the border safely.

There will be a lot to learn from the policy experiment we are all living with because of COVID-19. Overall, the U.S.-Canada border has been managed co-operatively and well. But we have room to experiment and innovate. Doing so will prepare us for the next crisis.