The rising prominence of Vietnam for the Indo-Pacific: Pratnashree Basu for the Observer Research Foundation 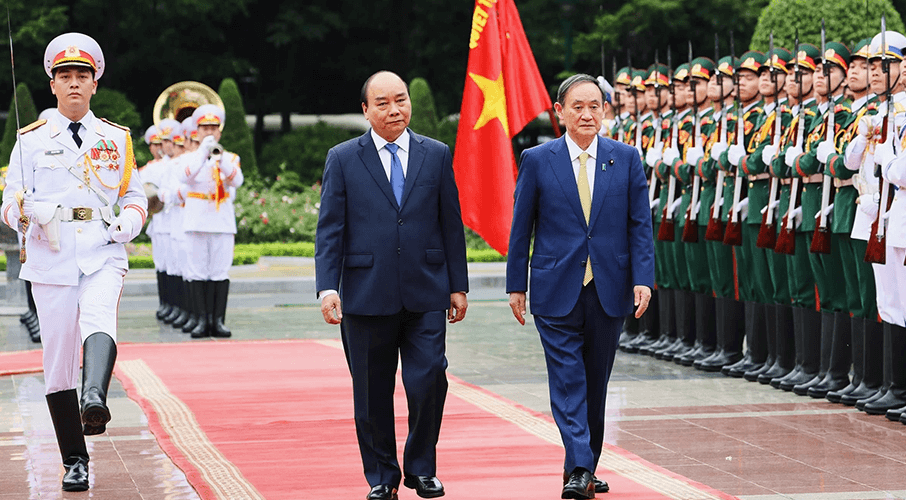 Located at the heart of Southeast Asia, facing the South China Sea and ringed by the Southeast Asian nations, Vietnam occupies an important strategic location, writes Pratnashree Basu. This article was originally published by the Observer Research Foundation and is being republished as part of the ORF-MLI Canada-India Initiative.

Japan’s newly elected Prime Minister Yoshihide Suga is on his maiden foreign trip after assuming office and the first destination is Vietnam. Hanoi was also the first foreign country visited by the previous Premier, Shinzo Abe, and echoes the substantive progress in the strategic partnership between the two countries. Japan has been strengthening its relations with Vietnam through increased defence cooperation in research, development of infrastructure, supply of vessels for boosting maritime security and so on. While strong ties between the two countries are not a recent development, having exchanged the Most Favoured Nation (MFN) status with each other in 1991, the renewed emphasis is part of Hanoi’s efforts towards ramping up its relations with countries that could in turn help balance against China.

As interests converge over safeguarding freedom of navigation and the salience of acknowledging international laws and codes of conduct, the significance of littoral countries of the South China Sea region have automatically risen. Among the littoral countries of the east of Indian Ocean, Vietnam is one of the most vocal countries regarding the maritime dispute in the region and has turned out to be one of most prominent countries to back the efforts that seek to contain or confront Chinese advances. Over the last few years Hanoi continuously engaged in actively channeling its efforts towards establishing and/or consolidating its relations with countries of the Asia-Pacific. As the current chair of ASEAN, there was also a lot of expectations placed on the country for steering the grouping’s activities and enhancing its capabilities which have to an extent been limited due to the pandemic. It is difficult to deny that strengthening bilateral and multilateral equations do not have any allusion to concerns regarding China. Incidentally, the collaborations which countries like the US, India and Japan have entered into with Vietnam are all based on defence.

Among significant developments in recent years have been the visit of Barack Obama to Vietnam in May 2016. Obama became the third sitting U.S President to do so in the post-Vietnam war era. The central aspect of his visit was the rescinding of a decades old ban on the sale of weapons and military equipment to Vietnam. Vietnam will however in the near future not be able to buy large scale weapons from the U.S because first, American equipment are too sophisticated for use along with Vietnamese weaponry; and second, they are also more expensive. However, thanks to the agreement, Hanoi is in a position to buy drones and surveillance equipment which will be important for its role in the South China Sea. The option of purchasing a wide range of U.S weaponry also helps to reduce the country’s long dependence for the same on Russia. While the official U.S statement on the decision to lift the ban has been a step towards the normalization of bilateral relations, the encouragement of the China factor in the decision cannot be discounted.

The withdrawal of ban on sale of weapons to Vietnam was closely followed by the agreements with India towards the joint production of military hardware as part of boosting coordination of multilateral defence and security cooperation frameworks. Hanoi and New Delhi have stepped up their bilateral defence and maritime cooperation as India seeks more visible footprint in the Indo-Pacific. India also planned to set up a satellite tracking and imaging centre in southern Vietnam. The system is expected to give Hanoi access to Indian observation satellites which cover the region. While the civilian purpose of the system would be beneficial for agriculture, science and the environment, the technology could have military uses as well as it would enable Hanoi to surveil the disputed South China Sea. Meanwhile, Vietnam has granted India access to oil exploration blocks in the disputed waters. The two countries have also engaged in enhancing interoperability between their respective navies together with regular interactions among government and military authorities.

The strategic partnership between Hanoi and Canberra has also been improving with Australia having become a more active participant in the Indo-Pacific project. The bilateral is strengthened with regular dialogues and high-level visits, cooperation in the sector of law enforcement and also includes education and training, personnel exchanges, and naval ship visits. There is however, a lot more room for deeper engagement between the two than what presently exists.

During Suga’s visit, Tokyo agreed in principle on supplying Vietnam with military gear and technology with reaffirmations on freedom of navigation and maritime peace and stability in the region. Escalating tensions over competing maritime sovereignty claims in the South China Sea, together with China’s insistence on restricting resolutions to bilateral mechanisms, its refusal to abide by the UNCLOS and rapid land reclamation activities on the reefs and small islands have made littorals of the region apprehensive. Stand-offs between Chinese vessels and those of Philippines and especially Vietnam, among others, have become frequent events. Given that the region witnesses a major bulk of maritime trade and is believed to house a sizeable volume of natural resources and gas reserves, its importance will not dwindle in a region where energy demands are steadily expanding.

Located at the heart of Southeast Asia, facing the South China Sea and ringed by the Southeast Asian nations, Vietnam occupies an important strategic location. And while any overt military conflict in the region is as yet unlikely, shared interests and strategic imperatives will command countries with geo-political interests to move towards a favourable equilibrium. In the near future multilateral and bilateral cooperation of littorals as well as extra-regional powers with Vietnam will likely become more energetic.

Pratnashree Basu is an Associate Fellow at Observer Research Foundation, Kolkata, with the Strategic Studies and Maritime Initiative and a US Department of State IVLP Fellow.