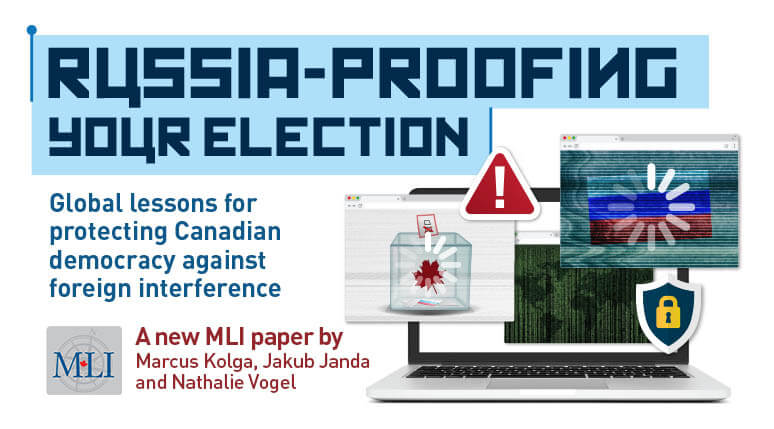 OTTAWA, ON (July 31, 2019): With the federal election only a few months away, Canadians are right to be concerned about the possibility of interference from Russia and other hostile foreign actors in our democratic processes. Foreign interference took place in our 2015 elections, and we need to be prepared for possible disruptions in our upcoming election. One only needs to look at some of the details to emerge from the Mueller report and his recent testimony to see the dangers of inaction.

Yet what can be done to boost our immunity and resilience against such intrusions? To answer this question, our latest report by MLI Senior Fellow Marcus Kolga, Jakub Janda, and Nathalie Vogel looks to the experiences of other Western states that have faced active threats from Russia, including Sweden, the three Baltic states, France, and Germany.

Titled Russia-proofing your election: Global lessons for protecting Canadian democracy against foreign interference, the report applies the insights from these case studies to outline tools that Canada can use to protect its elections and the democratic processes that underpin them.

In the past decade, the Kremlin has spent significant resources to disrupt the elections and decision-making processes of its perceived enemies. Perhaps the most well-known took place during the lead-up to the US presidential election in 2016.

“In the upcoming 2019 federal election, Canadians should expect that narratives that threaten to divide Canadians on both the right and left – such as those that promote anti-immigration, anti-globalism, and anti-pipeline – will intensify,” write Kolga, Janda, and Vogel.

“Of course, the Kremlin is not the exclusive source of threat; Iran and China have also been identified as threats,” say the authors. “Regardless of the regime, proxy groups that are organized to sow mischief and promote pro-regime positions represent a serious threat to our democratic processes.”

To address such possible intrusions, the federal government has announced several major initiatives to counter foreign disinformation in January 2019. Many of these measures should be commended. Indeed, former Estonian President Toomas Hendrik Ilves has stated that Canada is in many ways leading the effort to address foreign disinformation.

Yet, as Ilves himself has acknowledged, when it comes to Canada’s efforts, we are “still not doing enough,” underscoring the depth of the challenge.

With that in mind, the report outlines a number of measures that Canadian authorities can take to protect our democratic processes from foreign interference. These include:

Finally, according to the authors, “the public should be given the necessary tools to enhance their ability to consume media with a critical eye, to check facts, and question the platforms that promote and amplify foreign disinformation and false narratives.”

“Ultimately, a well-informed and educated public, media, and government will provide the most resilient form of defence against foreign malign influence and disinformation campaigns.”

Jakub Janda is Head of the Kremlin Watch Program and Director of the European Values Think-Tank based in Prague. He specializes in response of democratic states to hostile disinformation and influence operations.

Nathalie Vogel is a Non-Resident Senior Fellow with the Kremlin Watch Program. She has dedicated her career to the defense and the promotion of democracy and democratic movements around the world.