Dark days ahead for Canada-Russia relations as Putin certain to win referendum: Marcus Kolga in the Star 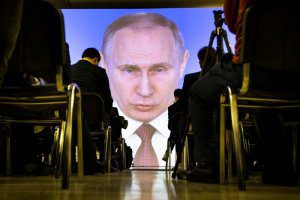 With the outcome of Russia’s constitutional referendum next week a fait accompli, the Trudeau government must prepare for yet darker days ahead by heeding the warnings of our intelligence experts and working with our NATO allies to defend our collective sovereignty, writes Marcus Kolga.

Next week, Russian voters have been told that they will “choose” whether to accept a constitutional amendment that will allow Russia’s President Vladimir Putin to remain in power until 2036. By that year, he will be 83 years old. Canada must be prepared for such an outcome.

The opportunity for Putin to exit Russian politics democratically and bloodlessly likely passed in 2012. After stepping aside for four years following his first two terms, Putin ran for a third presidential term.

Since then, the Russian ruler’s armed forces and intelligence agents have invaded and occupied Crimea and Eastern Ukraine, shot down a civilian airliner, aided in the bombing of civilians in Syria, engaged in extraterritorial assassinations, and interfered in dozens of elections in efforts to undermine the western rules-based order. In addition, pro-democracy opposition leader, Boris Nemtsov was gunned down steps from the Kremlin in 2015, while Nemtsov’s colleague, Vladimir Kara-Murza, survived two attempted poisonings.

Putin is acutely aware of the destruction and chaos that he and his fellow kleptocrats have sown and the massive wealth and power that they have accumulated along the way. For him, the alternative paths to remaining in power could lead to criminal and war crimes trials, or a trip straight to the gallows.

This is why last March, Putin reluctantly agreed to support his legislative allies who begged him to eliminate presidential term limits in order to allow Putin to remain in power 12 years past his current term, which ends in 2024.

There is never any doubt about what the outcomes of elections in Putin’s Russia will be and the rescheduled July 1 constitutional referendum is no different.

And yet, sagging popularity ratings, the mishandling of the COVID-19 crisis, and the collapse of oil prices are clearly making the Kremlin nervous.

There is a growing number of disenfranchised young Russians who expect Western-style freedoms and a European standard of living. These Russians are looking for possible alternatives to Putin.

Among the highest profile pro-democracy and anti-corruption alternatives is Alexei Navalny, who was charged by Russian authorities with criminal slander last week — a transparent attempt to silence him before the referendum. Petr Verzilov, a Canadian citizen and member of the activist Russian punk collective Pussy Riot, was detained on Sunday, in a not-so-subtle warning to deter other Russian activists.

On Wednesday, despite being in the midst of pandemic, the Kremlin held a mass demonstration of military power to commemorate the 75th anniversary of the end of the Second World War. In addition to commemorating Russia’s veterans, the propaganda event glorified the Soviet conquest and occupation of much of Central and Eastern Europe, through which, Putin deflects attention of Russian voters away from pesky distractions like democracy, human rights, and a Western-style standard of living. The goal of glorifying the Stalinist Soviet Union of two generations ago is to suggest that the same glory can be achieved, so long as Vladimir Putin remains at the helm.

Russia’s neighbours are also keenly alert to Putin’s sinking poll numbers. In late 2013, Putin’s popularity was at its lowest since he became President in 2000 but by the summer of 2014, after invading Ukraine and annexing Crimea, he hit a near all-time high.

In addition to the heightened anxiety of our Eastern NATO partners, there are other potential consequences for Canada; Russia’s rapid militarization of the Arctic among them. Over the past decade, at least 30 Russian Arctic military bases have been built or refurbished as part of Russia’s 2035 Arctic Masterplan, which calls for an aggressive expansion of Arctic resource claims.

A recent study by the Canada’s National Security and Intelligence Committee of Parliamentarians warned in a new report that the Kremlin “engages in foreign interference activities across Canada’s political system” and that “the nature and extent of Russia’s foreign interference threat is significant.” More worrying is the Canadian government’s failure to address this well documented threat since the last federal election.

With the outcome of Russia’s constitutional referendum next week a fait accompli, the Trudeau government must prepare for yet darker days ahead by heeding the warnings of our intelligence experts and working with our NATO allies to defend our collective sovereignty.