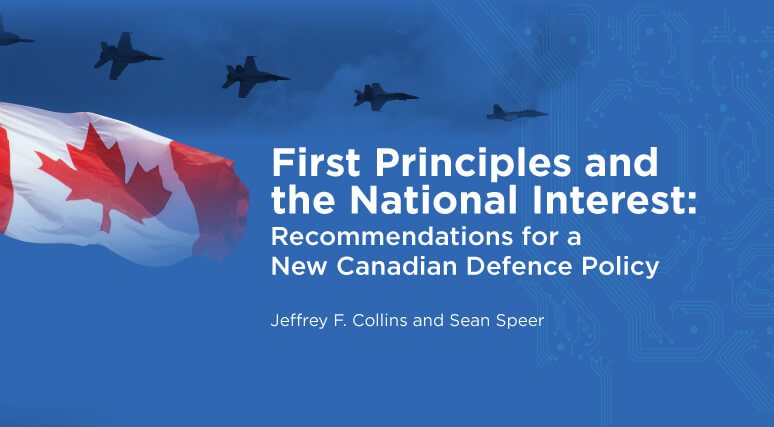 OTTAWA, March 9, 2017 – The Macdonald-Laurier Institute has teamed up with 19 leading defence policy thinkers and practitioners from across Canada to help shape the future of the country’s defence policy.

The paper, titled First Principles and the National Interest, steps back to explore the first principles of Canadian defence policy – by answering the “what” and “why” of defence rather than simply “how.”

It goes beyond a relatively narrow discussion of the Canadian procurement system, recapitalization, and other “how” matters. The answers to these questions flow from a greater understanding of what the Canadian military is and what we as Canadians want it to do.

The authors – Sean Speer and Jeffrey Collins – hope the paper will contribute to Ottawa’s plan for a new defence policy. The government’s Defence Policy Review is supposed to be released in 2017.

It is difficult to deny the need for revisiting Canadian defence policy. Nearly a decade has passed since the Government of Canada last released a statement on defence policy, this being the Conservative’s 2008 Canada First Defence Strategy (CFDS).

One can also add the changed global security environment, in which Canada must contend with a resurgent Russia, an aggressive China, and a renewed terrorist threat – not to mention a new US administration under President Donald Trump that has raised serious concerns in capitals around the world, including Ottawa.

The 19 experts who responded provided detailed comments based on a 12-question survey sent out in mid-2016. Their comments, in turn, are used to inform the paper’s analysis of Canada’s defence priorities and principles, security environment, alliances, UN involvement, and future capabilities. The paper does not identify respondents by their specific comments and respondents do not necessarily endorse the paper’s findings.

The paper sets out a number of recommendations on Canadian defence policy that the Trudeau government – still in the process of completing its DPR – would do well to heed:

Jeffrey F. Collins is a research fellow with the Centre for the Study of Security and Development at Dalhousie University and a research associate with the Atlantic Institute for Market Studies.