Standing for a United India: Ujjal Dosanjh and Shuvaloy Majumdar for Inside Policy 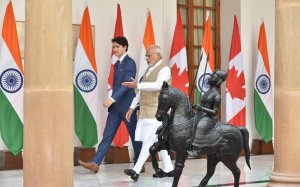 Canada has an interest in seeing a united and prosperous India, write Ujjal Dosanjh and Shuvaloy Majumdar.

Pain brings suffering, but also possibility. Beyond the immediate emotions in the aftermath of cruelty or abuse, comes a decision on how we choose to respond.  To some, the answer is to create more pain; inflict misery upon those who wronged us; forever relive the worst experiences and pursue a mission of retaliation as life’s new purpose. Indulging the dark pleasure of a sustained and permanent agenda of revenge is all consuming, leading only to more suffering. The alternative is reconciliation and justice, toward building a shared future.

This is an essential consideration in the current debate about Khalistani extremism in Canadian national life, and the highly charged allegations of sabotage levied by the Prime Minister’s national security advisor.

Since regaining independence, India has been a country racked with pain for more years than not. Partition saw hundreds of thousands killed amid pogroms and riots, while wars with neighbours slaughtered thousands more. Propaganda, paranoia, and repression became weaponized by governments during the Cold War, and fear of subversion was used to rationalize more violence still. Within a few short decades, India experienced bloodshed on a scale to rival Europe’s world wars. Vicious conflict between Hindus and Sikhs was but one particularly dark chapter of a larger tragedy, to which no Indian community has been immune, and where notions of secession are still regionally exploited.

Small wonder, then, that so many men and women chose to leave India behind, and begin a fresh life in Canada – a land promising unhyphenated equality through rule of law, and refuge from the political, economic and social turmoil of their homeland.

Yet even in Canada, some insisted on keeping alive the flames of old world hatreds. Fuelled by outstanding grievances — some legitimate, some imagined — certain factions among Canada’s Sikhs sought to exploit the fears and anxieties of their fellow Sikhs, and pander to their darkest insecurities of persecution and resentment. These extremists pushed a noxious mix of religious fundamentalism and political violence which, more often than not, was just a cynical way to increase their power. Predictably, the result was merely more pain, including, in 1985, the bombing of Air India Flight 182 – the worst aviation terror attack the world had known until 9/11.

Yet even in Canada, some insisted on keeping alive the flames of old world hatreds.

Today, over 30 years after that horrific event, it is ironic that in some important ways, India itself now represents a better example of progressing beyond the traumas of the past than some pockets of Indian-origin Canadians located thousands of kilometres away.

The very indulgence of identity politics in India from the 1980s is a legacy that Canadian political leaders must now confront. Prime Minister Indira Gandhi’s early political reliance on the vote banks of the likes of Jarnail Singh Bhindranwale, a terrorist now revered in the Khalistani cause, created the very monster that precipitated the crackdown at the Golden Temple in Amritsar and subsequent trauma of the 1984 slaughter of Sikhs.

In 2005, Indian prime minister Manmohan Singh – the first Sikh to hold that office – formally apologized for the anti-Sikh violence that gripped northern India. Singh’s apology attempted to right a failed legacy of his own Congress Party. But he also went beyond mere words – there were convictions of the guilty, reparations for victims, resignations of the politically culpable and special investigations at the highest levels.

Since early 2017, two key individuals await Delhi Court proceedings for their role in anti-Sikh riots: Congress leaders Sajjan Kumar and Jagdish Tytler. In January 2006, approximately $136 million was provided by the Central Government to help rehabilitate victims of the 1984 riots. And, in December 2014, the Indian government announced additional relief for the next of kin of all 3,325 victims of $10,000 per person. While justice has been slow in coming and further reconciliation work still needs to be done, the notion that there has been no justice at all for the sins of the past is simply false.

Today the vast majority of Indian Sikhs, just as they were prior to 1984, are proud of their country, committed to its unity and success, and celebrated at all levels of national life. Canadians celebrate Indian-origin Sikhs in precisely the same spirit.

Canada and India are united in our aspirations of peace and freedom in a world riven by those who seek to destroy both.

Beyond these bonds of people and political heritage, Canada and India are united in our aspirations of peace and freedom in a world riven by those who seek to destroy both. In its first decades of independence, India was a harbinger of our modern age of identity politics and religious violence. It still has its problems. But today, as it wrestles with its humongous challenges, it strives to serve as a model of how Sikhs, Hindus, Muslims, Christians, and others can learn to transcend a painful past polarized by difference in the pursuit of a future where success is shared.

The dream of an independent Khalistan, by contrast, is a backward idea from a backward time. It is a proposal without economic or democratic logic, unloved by the very Punjabis whose lives it would most directly affect. It is a fantasy rooted in religious bigotry and chauvinism, kept alive in Canada by thugs and political hustlers unbothered by the innocent lives that have been lost in its name. It is a proposal hostile to Canada’s interest in seeing a united and prosperous India, and in that sense, threatens not just one country, but two.

More than anything else, however, it is an idea inseparably tied to the immoral proposition that pain deserves to be spread, and victimhood is a resource to be grown and exploited for political purposes. Sowing hate and division as a viable answer to any question will never usher an era of love and courage.