The struggle for democracy in Belarus is our fight too: Chris Alexander for Inside Policy 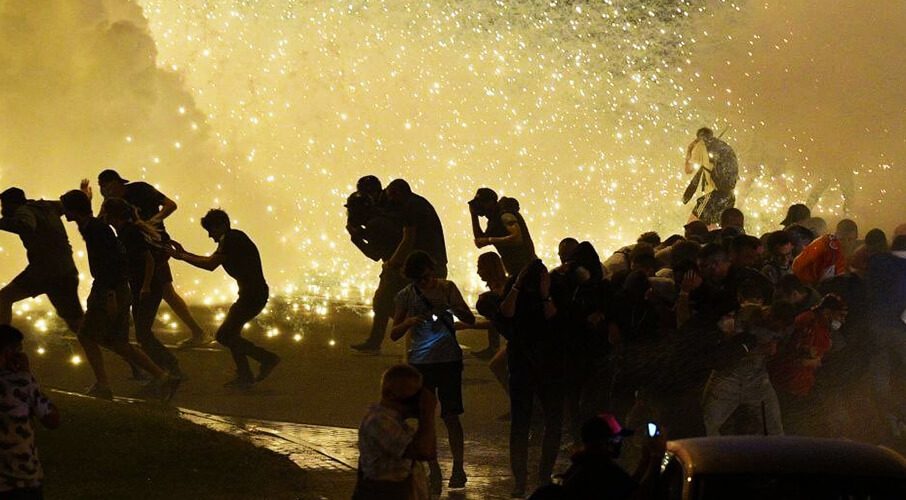 If repression continues, sanctions and other forms of economic pressure and public embarrassment need to hit Lukashenka and his clique hard, writes Chris Alexander.

Belarus matters today because democracy is literally hanging in the balance in that country. Belarusians have done their part: yesterday, despite what the Lukashenka regime might claim, they bravely voted a dictator out of office. For weeks they have been demonstrating massively and bravely in favour of opposition candidates – culminating in yesterday’s elections, which many observers see as one of the most blatantly rigged votes in modern European history. The protests and demonstrations are now set to escalate.

Now the ball is in our court. Do we in our (relatively) comfortable democratic pews care enough to do something? Can we forget COVID-19 long enough to remember political freedoms? Do we really believe that every one of this planet’s 200-plus countries deserves to have a government chosen by its people? Have we noticed that Russian President Putin and Chinese President Xi have been the first to congratulate Belarus’ dictator on his “victory” – out of sheer terror that the next wave of democratic change could sweep their own authority away, without notice?

Finally, have we understood, at long last, that the fate of each and every democracy is bound up with the fate of all free and democratic states, as we ought to know as students of the Chinese Communist Party’s 1989 Tiananmen Square massacre; Putin’s 1999 rise to power; or Chamberlain’s tragic 1938 dismissal of Czechoslovakia’s Sudetenland dispute as a “quarrel in a faraway country, between people of whom we know nothing”?

In recent years there have too many “tragic dismissals.” Hong Kong, Syria, Lebanon, Venezuela, Xinjiang, Tibet, Libya, Yemen, Sudan, South Sudan, Somalia, Mali, Iraq, Niger, République centrafricaine, Democratic Republic of the Congo; all have been written off as “faraway countries,” “endless wars” or “insoluble conflicts.” Has there been a serious international effort to release even one of these societies from its cycle of repression? Twin crises (Trump and Brexit) afflicting two of the world’s oldest democracies have made everything harder, as have new online platforms feeding polarization, isolationism and disenchantment in almost every body politic.

Democracy has always been fragile. According to the Center for Systemic Peace’s Polity IV dataset, in 1946 only 29 percent of the world’s governments were democratic, falling to 25 percent by 1976. By 2017, fully 57 percent were democracies, with 13 percent autocratic and the rest “mixed.” Now this legacy is again in jeopardy: since 2006, Freedom House has recorded 14 consecutive years of decline in both the quantity and quality of the world’s democracies.

Authorities rushed falsified results into print, but no one is buying them. Security and military forces poured into the centre of Minsk and other cities, but thousands of protesters filled the streets anyway. Fear of Lukashenka’s repressive power is ebbing.

Why now? There are two factors. First, Putin’s 2014 invasion of Ukraine reawakened fears of Russian belligerence, even prompting Lukashenka to make his first-ever speech in Belarusian in a shameless bid to shed his image as a Kremlin toady. Ever since 2014, Lukashenka has been manoeuvring: making overtures to the US, EU and NATO while continuing to host massive Russian military exercises; releasing some Belarusian political prisoners, then harassing most of his 55 potential rivals for this year’s presidential election. He arrested entrepreneur and blogger Siarhei Leanidavich Tsikhanouski (Svitlana’s husband) on May 29, 2020.

Second, he has lost control of the script essential to every dictator’s survival. In June, after 15 candidates were blocked, a trio of women formed “Female Solidarity” to lead the opposition to Lukashenka. In late July and early August, the largest political rallies in Belarusian history took place across the country, involving hundreds of thousands of peaceful demonstrators supporting presidential candidate Sviatlana Hyeorhiyeuna Tsikhanouskaya. At one rally, two DJs played Viktor Tsoi’s 1985 glasnost-era anthem “Peremen,” whose chorus calls for “Changes! We are waiting for changes!” A local official tried to pull the plug, but the music played on; the DJs are now national heroes.

When official results were announced on the evening of August 9, they lacked any credibility. Over five elections since his original victory in 1994, Bat’ka (or “Father”) Lukashenka had always polled within five percent of his first result. This time would be no different: 80.2 percent for Lukashenka and 9.9 percent for Tsikhanouskaya, as electoral authorities dutifully bluffed.

But this time was different. Belarusians knew the election had been stolen. Demonstrations began in Minsk and elsewhere.  Over 3,000 protesters were arrested; scores injured, some badly. Security forces used heavy tactics, including Czech-made concussion grenades. Internet service was throttled; journalists detained; intimidation ramped up. But everywhere Lukashenka’s authority was in freefall, with human rights groups, political parties and labour unions settling in for a long fight whose outcome still hangs in the balance.

Belarus has long been a lynchpin of European history. For five centuries much of it was part of the Grand Duchy of Lithuania and the Polish-Lithuanian Commonwealth. A brief independence after the 1918 Treaty of Brest-Litovsk was quickly snuffed out by the Red Army. On September 17, 1939, Soviet Russia – then a Nazi ally – invaded eastern Poland whose annexed territories formed 40 percent of postwar Belarus. The agreement effectively disbanding the USSR was signed on December 8, 1991 in a hunting lodge in the Belovezhskaya Pushcha forest, one of Europe’s last remaining primeval wildernesses, only eight kilometres from the Polish border.

Today Belarus is on democracy’s new frontier: bordered on the north by Latvia, Lithuania and the Russian enclave of Kaliningrad; on the west by Poland; on the south by Ukraine; and on the west, by Russia’s Pskov, Smolensk and Bryansk oblasts.

Belarus is a huge country – larger than the three Baltic states combined; two-thirds the size of Poland; and one-third the size of Ukraine, the largest country entirely in Europe. By the simple logic of geography, Belarus ought to be sharing prominently in the benefits of European integration. Forty percent of Ukraine’s trade is today with the EU, only 25 percent with Russia. In Belarus this trend is reversed: about half of its trade is with Russia; only 25 percent with the EU and Ukraine. Why?

The short answer is falsified elections and the KGB. By using every strong-arm trick in the book, Lukashenka has rigged votes, made corruption the norm and dissent a punishable offence. His state security agency is the only one to preserve the KGB label, signalling a commitment to stifling media freedom, harassing any and all opposition, and ruling by violence.

As a result, this quirky, profane, hockey-playing former Communist youth activist and border guard, who rose from the obscurity of a collective farm to become Europe’s longest-serving dictator, has paved the way for newer autocrats and would-be strongmen from Putin and Yanukovych to Orbán and Trump. Belarus has been a petri-dish for repressive tactics in the age of unscrupulous capital markets; wilting independent media; self-serving digital platforms; and weakened values-based alliances. When I first visited Belarus in 1995 to accompany Canada’s first ambassador, then presenting credentials to Lukashenka, Minsk seemed to be a fragment of the old Soviet empire, frozen in aspic by Lukashenka and his nomenklatura cronies.

All that has changed. Belarusians are now articulating a clear European and global vocation for themselves. They are sick and tired of Lukashenka’s hidebound, retrograde paternalism, his broken promises and his recourse to violence. They want a stronger, richer, more connected country, not a laboratory for neo-Stalinist dystopias.

Tsikhanouskaya’s platform promises only three things: new, truly free and fair elections; a two-term limit for presidents; and release of all political prisoners. Despite all the obstacles still in the way, my hunch is that people across Belarus – from Vitebsk and Gomel to Mogilev and Brest – are ready to sacrifice a great deal to put Lukashenka’s legacy behind them.

They will not succeed without support. Our primary goal should be to alleviate remaining fears and break Belarus’ isolation. As many democratic leaders as possible should join the presidents of Poland and Lithuania in calling for the real results of yesterday’s vote to be respected. European Commission President Ursula van der Leyen has made a strong start with her August 10 statement. All concerned today about growing Chinese and Russian belligerence in the world should be adding their voices to hers, while treating Svitlana Tsikhanouskaya as the president-in-waiting she has truly become. If repression continues, sanctions and other forms of economic pressure and public embarrassment need to hit Lukashenka and his clique hard, where they hurt most. As Donald Tusk, President of the European People’s Parties, put it: “We see a rejected President who has declared war on his own people, the President who has systematically broken the law and order of his own country.”

There are also things that we, as defenders of democracy, should not do. We must never yield to the powerful temptation, whose flames are fanned by Russian propaganda, to think of Belarus as part of anyone’s “sphere of influence.” We must not condescend to Belarus – by seeing it through an outdated Tsarist, Cold War or post-Soviet lens. We must not report the delusions or fabrications of dictators – such as the results so far published by Belarus’ Central Election Commission – as fact; in most cases, they deserve only to be ignored. We need to avoid clichés such as “Lukashenka is the last dictator of Europe”: even if he goes, Putin, Orbán, Erdogan and other would-be strongmen will be left, longing to pull the ladder of democracy up after them. Finally, we must never underestimate the potential of Belarus, a country in the heart of Europe, to flourish, to put venality and autocracy aside, and to rejoin the company of free nations once the fetters of fear, isolation and repression have been removed. In short, we must persist.

Every one of us can empower and amplify Belarusian voices: start with Twitter, by discovering a Belarusian news outlet or by writing your MP. As a key champion of a free, democratic, reforming Ukraine, Canada has an additional reason to stand with Belarus in these hours of need. Wayne Gretzky’s grandfather Anton, originally from Grodno/Hrodna in Belarus, would expect nothing less, as would former NDP leader David Lewis, born David Losz in 1909 in Svislach, also in today’s Grodno region of Belarus.

Belarus paid the highest price of any country, on a per capita basis, in terms of lives lost to the Holocaust, to repression and to fighting during the Second World War. Far from being “people of whom we know nothing,” Belarusians are central to the fabric of Canadian and European life: their homeland’s struggle for democracy today should be our fight as well.

Chris Alexander served in Afghanistan from 2003 to 2009 – first as Canada’s ambassador, then as deputy head of the UN mission. He was minister of citizenship and immigration in Stephen Harper’s Conservative government and spent six years in Moscow (and occasionally Minsk) as a Canadian diplomat.