The Practical Consequences of a Free Trade Agreement with China: New MLI Report 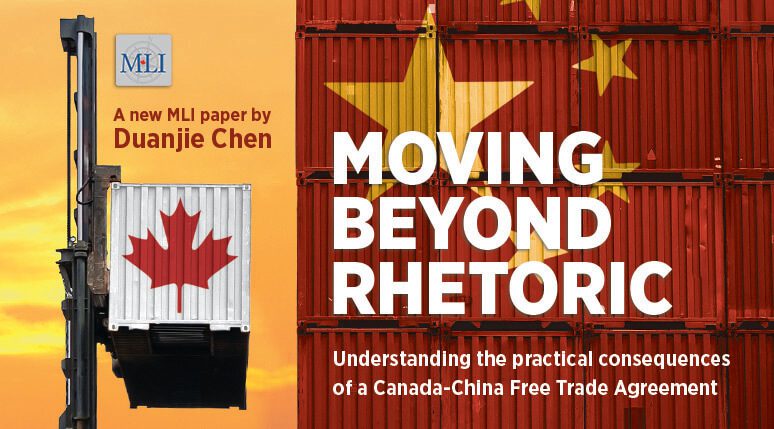 OTTAWA, ON (March 28, 2019): It may be easy for Canadians to see China as a stable trade alternative to the US – a potential partner with whom free trade could yield huge benefits for Canada once diplomatic relations level off again.

However, a new MLI report by Munk Senior Fellow Duanjie Chen makes the case that Canadian policy-makers may not fully appreciate the pitfalls of pursuing free trade with China. Titled Moving Beyond Rhetoric: Understanding the practical consequence of a Canada-China Free Trade Agreement (CCFTA), Chen’s sobering paper takes a deep dive into the unforeseen consequences of a CCFTA and why Canadians should see such an agreement as a non-starter at this point.

“We need a reality check,” writes Chen. “Given the Chinese government’s command power over its economy, its persistent violations of World Trade Organization (WTO) rules, and underhanded actions against the interests of its existing Free Trade Agreement (FTA) partners, Canada should not rush headlong into FTA negotiations with China.”

Accessing both Chinese and Western scholarship, her paper is a comprehensive and thorough analysis of an issue that is all too often reduced to rhetoric and feel-good sloganeering.

According to Chen, the most clear-cut reasons against entering into an FTA with China stem from irreconcilable institutional differences between Beijing and Ottawa. Whether its China’s command-and-control economy that relies heavily on state-owned or state-directed enterprises, the divergent national interests between the People’s Republic (PRC) and the West, or China’s history of massive-scale technological and intellectual property theft, China is a poor partner.

Another reason for caution when it comes to economic dealings with China stems from the PRC’s history of shady trade dealings with other countries. From Pakistan to New Zealand, the record clearly shows that FTAs with China are asymmetrical and marred by unforeseen consequences.

“Existing FTAs with China [reveal] a troubling pattern of benefiting China more than its partners… China has been a much shrewder negotiator in getting what it wants from its partners, all of whom have regarded China’s non-market system as harmless and therefore ‘casually’ gave China what it wanted at the negotiation table, only to regret it when the harm had already been done.”

Chen’s analysis underscores six key facts that Canadian policy-makers should consider as they mull the merits of an CCFTA or other trade policies:

In this context, recent diplomatic tensions with China should not be seen as a departure from normal China-Canada relations, but are perhaps best understood as the Chinese regime demonstrating its true character.

“In any proposed CCFTA, let us dispense with empty rhetoric and get serious about practical consequences… If negotiating an FTA with Xi Jinping’s China becomes so irresistible to our government, the best response would be to take one very careful step at a time.”

To learn more about the consequences of a Canada-China Free Trade Agreement, check out our latest paper here.