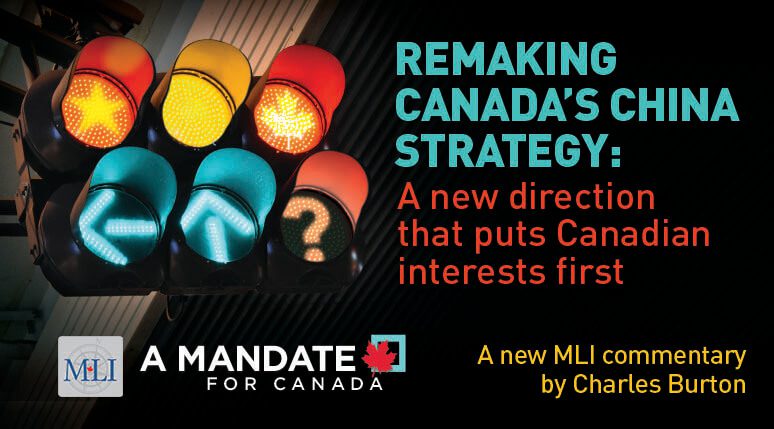 OTTAWA, ON (August 16, 2019): The federal election is a little over two months away, and its outcome remains highly uncertain. Irrespective of whichever political party wins, the new government faces the challenging work of remaking Canada-China relations, which has reached an all-time low following China’s hostage diplomacy and use of economic coercion in response to the arrest by Canadian authorities of Huawei CFO Meng Wanzhou.

In the latest entry in MLI’s “A Mandate for Canada” series, Senior Fellow Charles Burton makes the case for a measured, principled, and forward-looking China strategy.

Titled Remaking Canada's China strategy: A new direction that puts Canadian interests first, the paper details the shortcomings of the country’s past approach to the People’s Republic of China (PRC), outlining the need for a new strategy that better serves Canada’s national interests and is more complementary to that of our key allies.

Over the past more than 25 years, both Liberal and Conservative governments have approached China based on an implied quid pro quo. As Burton notes, “If Canada showed ‘friendship’ to the PRC regime by acceding to demands allowing China to further its economic and geostrategic interests in Canada, then China would be amenable to Canadian approaches on social issues such as human rights.”

Underpinning this formulation has been Canadian political naiveté about the purposes and intentions of the Chinese Communist Party (CCP), which has persisted into the early years of Justin Trudeau’s government.

Yet it is not through political naiveté alone that Canada had pursued policies highly favourable to the CCP’s interests. Equally important has been the CCP’s United Front Work Department and its highly effective, decades-long program of Canadian élite capture.

According to Burton, “This rosy view of China relations has been supported by major Canadian business interests who benefit from lucrative interactions with Chinese Communist state commercial networks.”

It is these interests, as opposed to issues of national security or Canadian principles and values, that should be at the centre of Canada’s China policy. Fortunately, there are growing signs that this captured élite foreign policy consensus is beginning to fray.

“China’s very strong retaliatory measures to pressure Canada to release a senior member of the regime – Huawei Chief Financial Officer Meng Wanzhou, detained under a US extradition request – has shattered any illusions about any moral obligation the PRC feels in response to Canada’s many decades of asymmetrical acts of ‘friendship.’”

The author offers a new direction in Canada’s China strategy – one that takes into consideration the need to safeguard Canadian security, promote Canadian prosperity, and project Canadian values. Key elements of this new strategy include:

Canada needs to assert comprehensively its national interests in its China strategy, even if doing so will lead to pushback from the PRC and its supporters in Canada. As Burton concludes, “A measured and principled approach to China is ultimately of the greatest sustained benefit to Canada, Canada’s like-minded allies, and, indeed, ultimately to China itself.”

***
Charles Burton is associate professor of political science at Brock University at St. Catharines, Ont., senior fellow at the Macdonald-Laurier Institute’s Centre for Advancing Canada’s Interests Abroad, and former counsellor at the Canadian embassy in Beijing.