It’s time to stand up for Hong Kong: Ai-Men Lau and Cherie Wong in The Star 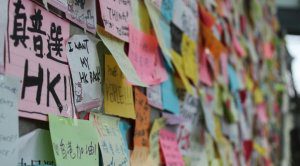 If the Chinese regime wants Hong Kong to be under Chinese rule, it is time for Canada to give them what they want, along with all the consequences, write Ai-Men Lau and Cherie Wong.

When the police served the arrest warrant to the former barrister and founder of the Hong Kong democratic party, Martin Lee, he knew that his arrest was part of a broader plan. COVID-19 may have distracted decision-makers in the West, but it has done little to deter Xi Jinping and the Chinese Communist Party (CPP). Rather, it seems the regime has become emboldened during this crisis.

The 1984 Sino-British Joint Declaration, an agreement registered under the United Nations, upholds a policy of “one country, two systems” in Hong Kong for 50 years. Last week, at the National People’s Congress (NPC), drafted a bill proposing the controversial National Security Law, which seeks to prevent, frustrate, and punish threats to national security.

The National Security Law would bypass Hong Kong’s autonomous legislative process. The Chinese regime argued the law is necessary to combat terrorism and foreign interference, strengthening national security. But critics, activists, and experts view this bill as a death blow to the freedoms and rights of Hong Kong.

The CCP regime has made it clear: The Joint Declaration will no longer be respected. If the bill is approved by the NPC, Hong Kong, as we know it, is done.

This is something we, Canadian Hong Kongers, have long feared.

The 2019 protests were and are about preserving Hong Kong’s democratic future and basic human rights. Hong Kong was a crystal ball; it provided insights into the global authoritarian ambitions of the CCP and Beijing’s strategic direction that sought to erode Hong Kong’s autonomy.

But the crystal ball is no more. Through the smoke of tear gas, a troubling realization has emerged — Hong Kong is a failed test with violent ramifications.

The streets of Central that we used to roam carefree have become battlegrounds. Neighbourhoods we once called home are scenes of police brutality. Social media is a place where we could be confronted with a bloodied image of our loved ones.

There is a unique and visceral pain to grieve from afar, as our cherished home is being ripped apart.

Even more troubling is that these very geopolitics have spilled over to Canadian soil. As Canadian Hong Kongers exercised their constitutional rights to freedom of assembly and expression, many reported feeling surveyed and unsafe and even being silenced.

Henry Lam’s group Free HK MTL was blocked from participating in Montreal’s pride parade due to unspecified threats from pro-CCP supporters. The lack of response or clear direction from the federal government to the events in Hong Kong abroad or at home did not go unnoticed by the Hong Kong Canadian community.

It is a bitter irony that Canada is a supporter of the 1984 joint declaration yet has remained largely silent. Canada should speak up for Hong Kong — to support human rights in the territory and protect Canadians here at home from CCP intimidation. But much more must be done. Upholding the rule of law and liberal world order should not be a partisan issue. We need to take a strong stance against the blatant disregard for international contracts and fundamental human freedoms.

There have been numerous calls to invoke the Magnitsky sanctions against Hong Kong and Chinese officials responsible for egregious human rights violations. This would send a strong signal that Canada is committed to upholding democratic values and human rights, that we are ready to take a stand against the Chinese regime.

Furthermore, should the national security law be approved and implemented, Canada should revoke Hong Kong’s special administrative region status. Xi Jinping and the CCP have made it evident through proposing the national security law that they are dismantling Hong Kong’s political and press freedoms. This is a blatant violation of Hong Kong’s Basic Law Article 18, a statute that upholds freedom of thought, conscience, and religion. If this law is implemented, Hong Kong is no longer an autonomous region.

If the Chinese regime wants Hong Kong to be under Chinese rule, it is time for Canada to give them what they want, along with all the consequences.

Ai-Men Lau is a communications officer at the Macdonald-Laurier Institute. Cherie Wong is the executive director and co-founder of Alliance Canada Hong Kong.