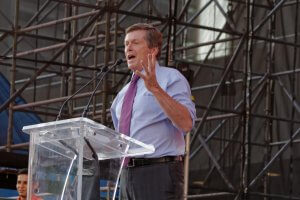 The size of John Tory’s mayoralty win gives him the opportunity to lead a push to strengthen the role of mayor in city governance, writes Sean Speer.

Mayor John Tory described his re-election victory with 63.5 per cent of the vote as a “historic mandate.” It’s hard to argue with this characterization. His total votes and overall share are both the highest that we’ve seen since 2000. He also won every ward across the city. This was a broad-based electoral affirmation for the mayor and his agenda.

It’s even more significant when one compares his renewed mandate with those of the city’s now 25 councillors. Mayor Tory not only secured 18 times more votes than any one councillor, his overall tally of 479,659 votes is roughly 129,000 more than all of the councillors combined. The opposite was the case in 2014 when the mayor garnered about 144,000 votes fewer than the winning councillors, albeit with a lower turnout rate this time around.

Yet, despite the relative size of his electoral mandate, the mayor’s powers and influence are still limited. His ability to set and advance strategic priorities faces real constraints. He has few formal mechanisms to influence the will of council or drive the budget process. The mayor is ultimately just one vote now among 26 members in the chamber, as well as a weak chief executive. A City Hall Task Force, housed at the University of Toronto and co-chaired by my colleague Gabriel Eidelman, has called “Toronto the largest city in North America without a ‘strong-mayor’ system.”

It’s been more than a decade since the institutional role of the mayor and his or her executive and legislative powers were subject to significant reform. The controversy surrounding the provincial government’s Bill 5 returned some of these questions to the public domain. Mayor Tory’s substantial electoral mandate should only hasten this debate. Torontonians shouldn’t resist it.

There would be little appetite for a mayor with a weak electoral mandate to argue for strengthened powers. It would rightly leave most of us feeling discomforted. Accusations of an anti-democratic “power gap” would seem justified.

But, with nearly two-thirds of the vote, Mayor Tory, who has previously lamented that he has the “authority to do very little,” is strongly positioned to advance the case for sensible reforms to city governance, including the role of the mayor relative to the council and as chief executive.

This, of course, does not mean that Toronto’s mayor ought to have disproportionate or unprecedented powers. Overreaching would erode the upsides of the city’s less disciplined, more collaborative decision-making process. Reaching compromises on normative questions about the role of government, tensions between development and the environment, the balance between personal freedom and public order in policing, and so on, is messy. It stands to reason that our local governance is at times complicated. This is a feature rather than a bug of localism.

Still, there’s scope to strengthen the role of the mayor and still preserve the best parts of city governance. Here is where Mayor Tory and his political allies ought to focus.

One modest yet useful idea put forward by Prof. Eidelman and his multi-partisan task force is an annual Mayor’s Address to Council to give the mayor a formalized opportunity to set out a legislative agenda for each year. Such an agenda-setting model, which is common in other North American cities, would put an onus on the mayor to take ownership of the agenda and cease hiding behind non-transparent processes and negotiations. It would also bring greater coherence and accountability to council deliberations.

A more ambitious reform would be to shift responsibility from the city bureaucracy to the mayor for submitting the first budget draft to the Budget Committee. A “Mayor’s Budget”wouldn’t preclude councillors from scrutinizing or making amendments to the plan. But it would enable the mayor to establish the basic budgetary framework and, in so doing, set the parameters for fiscal prioritization and trade-offs.

There are no doubt various other reforms that might be put forward. But the key point is that Mayor Tory’s decisive victory on the heels of the Bill 5 controversy sets the stage for a sensible discussion about how to strengthen the role of the mayor and improve city governance. The city is ready for it. It’s now up to the mayor to show leadership.