How Trudeau's appeasement of China failed Kovrig and Spavor: Shuvaloy Majumdar in the National Post 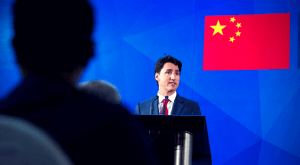 By doing nothing, we give tacit consent to Beijing’s aggression. It is long past time that this charade was brought to an end, writes Shuvaloy Majumdar in the National Post. Below is an excerpt from the article, which can be read in full here.

When Canadians Michael Kovrig and Michael Spavor were first illegally jailed by the Communist Party regime in Beijing, perhaps we could be forgiven for thinking that Canada’s weak-kneed diplomacy was the result of misplaced passivity. After all, Canadians and their government see themselves as global good guys, and anyway, attempts to befriend the Chinese Communist Party just made good business sense.

But then China doubled down on its punishment of Canada. It engaged in economic coercion through brutal tariffs against Canadian farmers; it pursued sham trials against Kovrig and Spavor; and it deployed “wolf warrior diplomacy” in an attempt to berate and bully us into submission.

We really shouldn’t have been surprised. A mere glance at our allies, including Australia’s resistance to China’s weaponized commerce, would have shown what we’re up against. China has used the same playbook against other countries, including those which did virtually nothing to offend the notoriously sensitive officials of the CCP. China’s strategy of aggression and hegemonic interests have been laid bare for all to see for years now.

Canadians themselves repudiated this aggression. National opinion polls reveal an overwhelmingly negative view, one that has intensified over the last half decade, toward the People’s Republic. Indeed, the Canadian public demands that their government stand up against the regime’s many abuses.

Despite all the facts, despite overwhelming public direction, the Trudeau government has stubbornly pursued a policy of appeasement. But if anything, Ottawa’s accomplishment has been to only encourage Beijing’s aggression. In the absence of any consequences for its actions, Beijing has only increased the pressure on Canada, including putting Kovrig and Spavor on trial as an example and warning to all.