Trump’s behaviour at Helsinki will only embolden Putin: David McDonough for Inside Policy 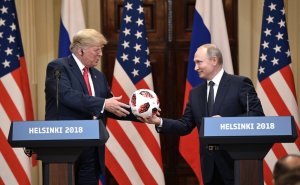 The Trump administration's disconnect between rhetoric and policy weakens deterrence against Russia and increases the threat of miscalculation, writes David McDonough.

President Donald Trump’s recent summit fiasco with Vladimir Putin in Helsinki has been roundly (and rightly) criticized. The spectacle of a US president being so weak and subservient to a Russian leader, and so willing to blame America for the problems in US-Russia relations, has even proven to be too much for some of his Republican enablers.

You do not have to fully agree with CIA director John Brennan that this summit was “nothing short of treasonous” to consider Trump’s performance an unprecedented act of appeasement by a US president to a hostile power, likely made even worse by the implausibility of his bizarre excuses and the degree to which he then quickly back-tracked from them.

Some prominent observers, even while expressing harsh criticism for the President’s Helsinki performance, take some measure of comfort that Trump’s soft-on-Russia rhetoric doesn’t match recent American military economic and foreign policy under Trump, which continues to put Putin at a growing disadvantage.

Admittedly, there is some truth to this matter. In the last two years, the United States has significantly increased its defence spending, accelerated its support of the European Deterrence Initiative and expanded its participation in large NATO military exercises and other assurance measures remain robust.

Even critics of Trump’s behaviour acknowledged that the NATO summit in Brussels did result in substantive agreement – from reiteration of Article Five in the Brussels Declaration to the Readiness Initiative to establish large Allied units capable of responding in 30 days or less, which must be comforting for the Baltic members isolated on the other side of the Suwalki Gap.

You do not have to fully agree with CIA director John Brennan that this summit was “nothing short of treasonous” to consider Trump’s performance an unprecedented act of appeasement.

More ardent Trump supporters may try to convince us that this is some kind of good cop/bad cop routine, in which Trump might rhetorically be soft on Russia to provide cover for his administration’s tougher policies. They may suggest there’s more than meets the eye when it comes to the Trump administration’s capacity for a coherent Russia strategy.

There are two problems with such views.

First, it would be a mistake to assume that the policies described above arise directly from Trump.

Keep in mind that the Pentagon is a massive bureaucratic actor with its own interests, preferences, and activities, with a Defense Secretary given extensive delegated authority to make key military decisions.

To be sure, Trump did choose to delegate even greater authority to the Pentagon over military operations and setting troop levels. His appointed Defense Secretary James Mattis has also emerged as perhaps the most powerful member of his administration, with the ability and willingness to publicly disagree with the president on a range of strategic policy issues, such as the value of alliances, international law, and the role of the State Department. But that’s a long way from saying that Trump is directly responsible for such policy continuity when it comes to the defence of Europe.

Indeed, it is telling that when Trump has been directly involved on issues with Russia, he has consistently opted for a much softer approach – as demonstrated by his abrupt rejection of new sanctions on Russia in April 2018, his offer to bring Russia back into the G7 at Charlevoix, Quebec, or by his performances at the Brussels and Helsinki summits.

It’s also difficult to separate such behaviour from his equally acrimonious behaviour towards his key European allies, from his blatant attempts to weaken the European Union to his strident calls to increase defence spending that seem designed to rupture NATO solidarity rather than strengthen it. A good contrast is how Barack Obama was able to both increase the US military presence in Europe and pressure European countries to increase defence spending, a trend that began in 2014 before Trump, all the while reinforcing rather than sabotaging Allied unity.

With that in mind, it seems the continuity of a more robust US approach to European defence reflects the preference of the Pentagon, with the president so far unable or unwilling to force his view on that actor.

Second, given the worrisome presidential rhetoric and actions emanating from this White House, it may be tempting to be relieved by the underlying policy continuity on European defence. But that would also be unwise – as this disconnect between rhetoric and policy significantly weakens deterrence and increases the possibility of miscalculation.

For example, the US military is clearly attempting to convey a strong message of deterrence against Russia and solidarity with its NATO allies. And, if Russia does unwisely encroach on a NATO member, in the Baltics for example, it will likely face a united Allied front. That is the reason why units from multiple NATO countries are deployed in the “enhanced forward presence” mission in the Baltics and Poland – to help ensure such a united response.

Equally dangerous is the fact that Trump could very well force a change in policy, especially as the trust in his own foreign policy instincts have only grown.

Yet what happens if the risk-prone Russian president looks instead to Trump’s appeasing rhetoric and actions at Helsinki, his consistent skepticism of NATO, and unwillingness personally to reiterate NATO’s Article Five clause on collective defence, most recently questioning whether the US should defend NATO member Montenegro – a country that, it should be remembered, was the victim of what looks to be a Russian-backed attempted coup to prevent it from joining NATO. Rather than being deterred, Putin could find himself further emboldened to take action in the Baltics, Eastern Europe, or beyond.

This apparent disconnect not only seriously weaken the Alliance’s ability to deter an aggressive Russia but could also result in a serious miscalculation – if Putin encroaches on a NATO member only to find a united military response from the Alliance.

Equally dangerous is the fact that Trump could very well force a change in policy, especially as the trust in his own foreign policy instincts have only grown. One only needs to look at his personal approach to North Korea, which led to Trump abruptly announcing he would cancel joint military exercises with South Korea without even first informing the Pentagon.

The end result with North Korea is certainly telling, with the sanctions regime failing, the China-DPRK relationship blossoming, and Pyongyang now expanding its nuclear facilities. Indeed, the Trump administration now seems to accept that there is no timeline for denuclearization, an admission that implicitly says disarmament is no longer in the offing. And what did Trump get for rehabilitating North Korea and dismantling his own “maximum pressure” campaign? Apparently very little.

Ultimately, there is little to stop Trump if he decided to do something similar in Eastern Europe – to pull back US military deployments to Europe or withdraw from participation in NATO exercises or operations like the US enhanced forward presence in Poland, in return for an equally empty promise from the Kremlin. Russia’s admission of making agreements with Trump on international security issues, with still deafening silence about their content from the corridors of power in Washington, is certainly a worrisome sign.

The fact that Trump has not already made such commitments should not make observers sanguine. He simply may not see it as politically feasible to start what could turn into a prolonged political battle with the Pentagon, particularly at a time when he is seen as waging a war against his own intelligence and federal law enforcement agencies. But that could very well change, especially if he decides to replace Mattis as Defense Secretary for someone more pliant and attuned to Trump’s own soft, appeasing approach to Russia.

America’s current policy continuity vis-à-vis NATO is no reason for American allies to feel secure. There are severe dangers associated with such a disconnect between rhetoric and policy with the Trump administration. Equally important, Trump’s own preferences on Russia don’t look like they’ve been fully expressed in government policy yet. The key word is “yet” – as we’re not even two years into the first term of this most unusual of administrations. Things may get worse before they get better.

David McDonough is deputy editor at the Macdonald-Laurier Institute and a research fellow at Dalhousie University's Centre for the Study of Security and Development.