This violence must stop. It's only preventing reconciliation: Melissa Mbarki in the National Post 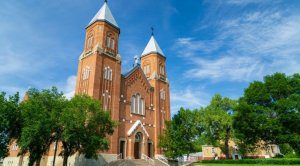 We are not in any way honouring residential school victims or survivors by burning down churches and toppling statues, writes Melissa Mbarki in the National Post. Below is an excerpt from the article, which can be read in full here.

As I witnessed both Indigenous and non-Indigenous Canadians wearing orange shirts on Canada Day, I felt a sense of unity I have never before experienced in my lifetime, and pride that our voices are finally being heard.

Canadians are coming together to address an issue that was relatively hidden from the general public — residential schools. If you did not grow up near them, you would not have known that the last one closed in 1997. The youngest survivors range in age from 30 to 45 now.

The day after Canada Day, burned churches and toppled statues made the headlines. How did a movement that was intended to bring awareness and education suddenly turn violent? The unity I had felt the day before was diminished by these acts. I felt sadness and anger at what was happening. In our traditional ways, we respect all religions. We do not promote hatred, vandalism or the destruction of anyone’s place of worship.

On Canada Day alone, 10 churches were vandalized in Alberta. The public support we had garnered earlier turned to anger. Rumours of it not being safe to travel to certain places hit social media. If we were looking for reconciliation, we had just moved 10 steps back.

Did Indigenous people start all these fires? A 40-year-old man from Langdon, Alta., has been charged with setting grass fires on Siksika First Nation on Canada Day. Videos of non-Indigenous women throwing orange paint on a church circulated over the weekend.

Survivors are having a difficult time with this violence around them. Some, like my grandmother, believe in Catholicism. Many are overwhelmed right now and are defending themselves for a crime they did not commit.