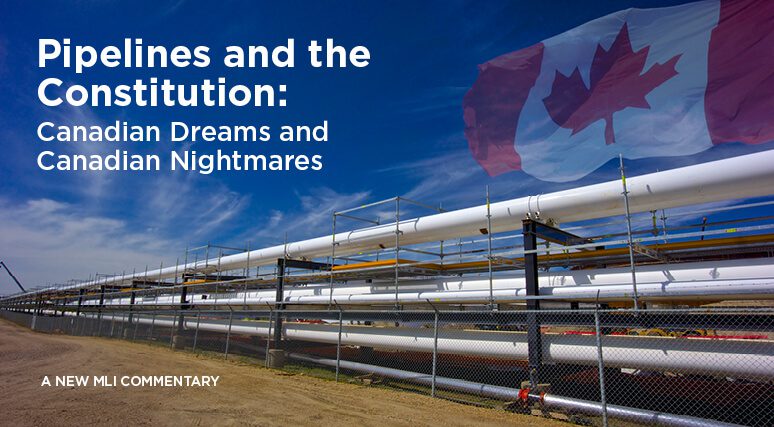 OTTAWA, ON (April 27, 2018):  Canada has come to teeter on the brink of what some have called a “constitutional crisis” arising from major jurisdictional disputes over the Kinder Morgan Trans Mountain pipeline. Of concern are BC’s moves to obstruct the pipeline’s development, and the potential unconstitutionality of such action. This week the BC government filed a reference case with the BC Court of Appeal to test its regulatory powers.

There is a complex mix of legal issues involved. Yet, as MLI’s study “Pipelines and the Constitution: Canadian Dreams and Canadian Nightmares” reveals, interprovincial transportation has long been an important federal power – and that gives rise to a primary federal jurisdiction over interprovincial pipelines.

MLI Munk Senior Fellow Dwight Newman, who authored the paper, goes on to describe areas of overlapping provincial jurisdiction, such as over environmental protection. But Newman also gives an important caveat: “So long as these sorts of decisions did not interfere with the fundamental decision about the pipeline.” As he goes on to say, “Even laws that the province could validly enact are not allowed to interfere unduly with a pipeline.”

At the same time, Newman tries to offer a clearer path forward for the pipeline in the face of BC’s obstructionism.  He suggests that the federal government should legislate a project code under which it would take clear authority over all aspects of the project. Newman says that the constitutional doctrine of paramountcy would result in this federal code rendering competing provincial regulations inoperable, thus providing an extra assurance of legal clarity.

Equally relevant to the Trans Mountain dispute but not receiving enough attention is the question of Indigenous rights. Two major court cases impacting the project have yet to be decided. And deep complexities exist in how Indigenous rights are to be understood. The Supreme Court recognizes the duty to consult and accommodate Indigenous interests, but much greater uncertainty surrounds the concept of “free, prior, and informed consent (FPIC),” as presented in the UN Declaration on the Rights of Indigenous Peoples.

Also uncertain is which rights-bearing communities need to be considered, especially when they might overlap. And the rights of economic self-determination of those Indigenous communities who have signed on to resource projects. The federal government needs to get these things right.

Among the key recommendations of this paper:

“The credibility of the federal government in managing national issues and upholding the rule of law is at issue,” concludes Newman. “And Canada’s relationships with Indigenous peoples will also be significantly affected in this specific instance. This project highlights the need for attention to some longer-term issues. The stakes are high.”