We’ll pay for all these down payments: Jack Mintz in the Financial Post 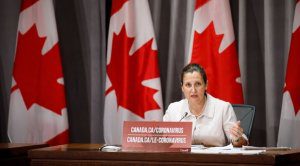 Canadians won't like what comes next — the higher taxes that the current lack of fiscal discipline makes inevitable, writes Jack Mintz in the Financial Post. Below is an excerpt from the article which can be read in full here.

I was hoping our new minister of finance, once a fine journalist, might produce a fall fiscal statement written clearly and to the point. Instead, we are treated to 237 pages of repetitive back-slapping and cliché-laden phrases that few will bother to read.

The statement does leave one clear impression: Ottawa believes only massive public spending and deficits can generate economic growth.

A good illustration is the mangled thinking found on page 38. The government believes its whopping expenditure of $322 billion in direct support, plus the provinces’ $39 billion, stimulated demand and increased 2020 GDP by 4.6 per cent. It doesn’t really know that — its Keynesian model misses the supply shock from the pandemic. As a footnote explains: “the short-term boost in economic activity caused by government direct spending will be mitigated by the effect of social distancing, i.e., some households being more likely to postpone spending of their income support.”

The fiscal update does not say by how much each dollar of government spending increases GDP but during the pandemic it must be low. Household incomes rose by 13 per cent during the downturn, more than in any other OECD country (even the U.S. during its election year). But despite all this new money, households did not spend more. Instead, our household saving rate jumped by 23 per cent of personal disposable income, more than in any other country. The update spins this embarrassing fact by saying Canadians were getting a “down payment” now to spend later.

But will they? Demand may well remain subdued in 2021. As Statistics Canada reported Tuesday, GDP rose almost nine per cent in the third quarter, leaving it five per cent below its February value. But with rising COVID cases this winter, and maybe on into the summer, health restrictions will be tightened. Vaccines may not be broadly available until fall. With $124 billion in federal and provincial tax deferrals and $87 billion in credit support both ending, a frightening bill will come due for many households and businesses. Add on the tax due on the CERB and the like and many Canadians’ pandemic savings will be spoken for.