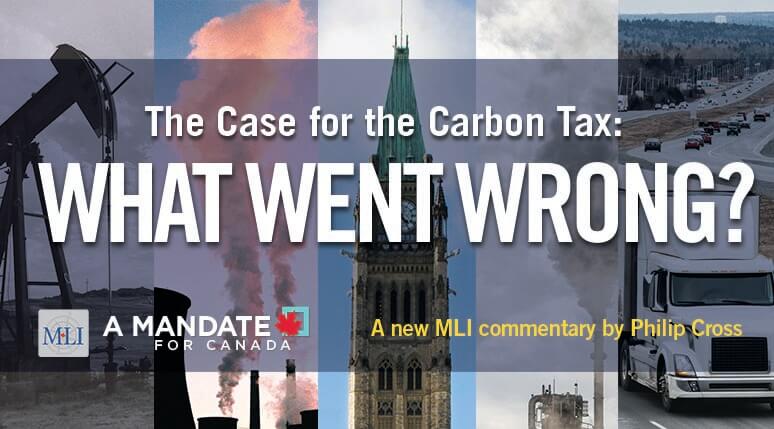 OTTAWA, ON (July 9, 2019): At one time, the carbon tax was a popular policy with a significant number of proponents on both ends of the political spectrum. Now, public perception of the controversial tax is split along deeply partisan lines. Proponents and detractors of the policy are likely to be locked in bitter conflict during the 2019 election.

In order to better understand public perception of carbon taxes, a new Macdonald-Laurier Institute commentary by MLI Munk Senior Fellow Philip Cross traces the policy’s evolution. As part of MLI’s “A Mandate for Canada” series, this paper – titled The Case for a Carbon Tax: What Went Wrong – finds that proponents of the tax failed to properly account for a number of factors.

“This paper does not argue for or against carbon taxes,” Cross explains. Rather, it is “a study of a public policy failure to communicate and convince, of lessons not learned from past public resistance to consumption taxes, and of the lack of practical understanding of innovation, the most important process driving economic growth.”

At its very core, the study finds that policy-makers failed to appreciate the nuances of the North American tax and regulatory system. In Canada and the United States, taxpayers are far more tolerant of income taxes than they are of consumption taxes, like the carbon tax. Despite arguments about the greater efficiency of carbon taxes compared to other climate change solutions, public perception in North America is more dependant on perceived fairness and equity than efficiency.

“The carbon tax levied in Canada applies more to domestic production of carbon than imports,” writes Cross. “If domestic production is targeted, Canada faces the European conundrum of falling carbon production even as carbon consumption rises steadily because of imports from carbon-intensive countries such as China.”

Cross also points out the poor messaging surrounding the carbon tax. Broadly speaking, the tone of carbon tax advocates has come across as condescending and self-assured despite mounting legitimate criticism with the policy.

“This made proponents appear arrogant in dismissing opposing arguments instead of trying to understand and address these concerns.”

This, combined with the lack of revenue-neutrality in most jurisdictions, has resulted in the carbon tax becoming a highly partisan issue. Rather than seeking bipartisan consensus, perceptions of the tax quickly split along party lines.

While the paper does not purport to argue for or against carbon taxes, it does provide some recommendations to government. It argues that policy-makers ought to consider seriously the role that innovation must play in reducing overall emissions.

“Technology potentially offers the lowest cost solution for reducing emissions,” says Cross. “The most important role of government in reducing GHG emissions may be supporting technological research, not enforcing regulations or tinkering with relative prices.”

To learn more about what went wrong with the carbon tax, check out the full commentary paper here.