Why the West should ‘Never give in’ on global institutions: MLI Commentary by Olaf Wientzek 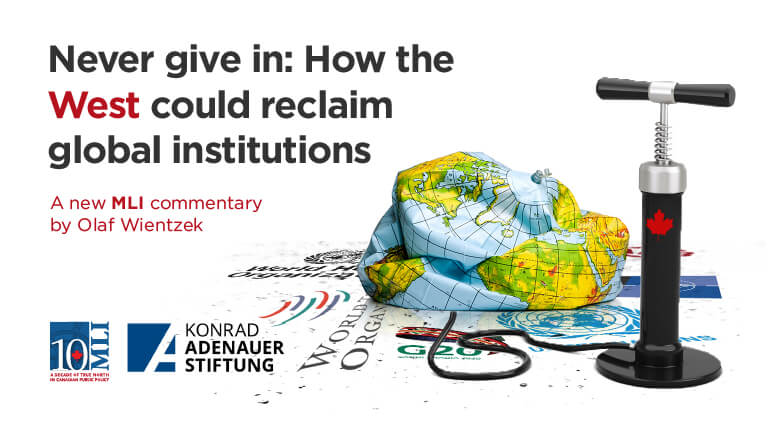 OTTAWA, ON (December 9, 2020): This year was a tough one for international institutions. From a failure to contain and combat COVID-19 on the part of the World Health Organization (WHO) to a concerning rise of authoritarianism within the United Nations Human Rights Council, 2020 has many questioning whether these flawed institutions are worth saving.

However, according to Olaf Wientzek, the director of the Geneva Office of Konrad-Adenauer-Stiftung, the response from the West cannot be abandonment; we must instead work hard to fix global institutions. This is the message in MLI’s latest commentary titled “Never give in: How the West could reclaim global institutions.” In it, Wientzek outlines both the problems facing these institutions and the actions that countries like Canada ought to take to provide remedies.

“In this already difficult context for multilateralism, the COVID-19 crisis has highlighted two somewhat paradoxical trends,” explains Wientzek. “On the one hand, it has shown the faults and limitations of several multilateral bodies, on the other hand the crisis has underlined their enormous (potential) importance.”

According to Wientzek, global institutions like the WHO have largely been restricted by their member states in terms of how they can respond to problems like the COVID-19 pandemic. He notes that this is most clear with China’s actions to restrict WHO access and block Taiwan’s participation.

Many of the flaws with the international order are also clearly present when looking at the sway autocratic regimes can collectively exercise over bodies like the UN Human Rights Council. Once again, China’s dominant engagement in these fora have shielded Beijing from criticism despite its egregious human rights abuses and its actions aimed at undermining the rules-based international order.

However, Wientzek urges that to solve these problems requires greater Western involvement, not less. The Western retrenchment on the global stage, led by the US, has created a power vacuum that countries like China have readily exploited, thereby further eroding international institutions.

“Instead, countries that support liberal democracy and a rules-based international order should attempt to counter these developments,” explains Wientzek. He provides four distinct strategies:

With authoritarianism on the rise globally, it should not be a surprise that multilateral organizations do not always reflect the norms and values in the spirit of which they were created. Wientzek says that “it is therefore crucial for the West to actively engage in these organizations and to contain the undermining of their underlying norms and values.”

To learn more about how Canada can work toward addressing the flaws plaguing international institutions, read the full commentary here.

Olaf Wientzek has been the director of the Geneva Office of the Konrad-Adenauer Stiftung (KAS) since May 2019. His office closely follows the work of the various Geneva-based multilateral organizations.