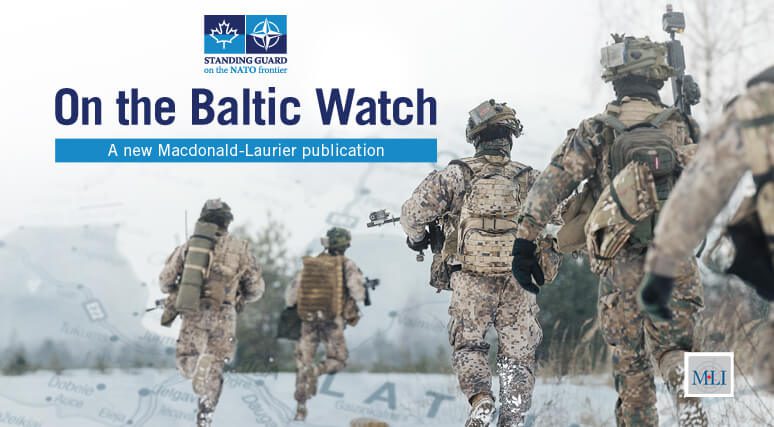 OTTAWA, ON (June 25, 2018): In 2017, in solidarity with its NATO allies, Canada took on the role of a Framework Nation for the enhanced Forward Presence (eFP) battlegroup in Latvia. This month marks the one-year anniversary of this deployment, which is up for renewal in 2019. It’s time for Canadians to think about the importance of this country’s commitment to transatlantic security.

A new MLI report, titled On the Baltic Watch: The Past, Present and Future of Canada’s Commitment to NATO’s Enhanced Forward Presence in Latvia, finds that in the face of rising Russian aggression, there should be little doubt that Ottawa ought to continue to support NATO’s collective efforts on the Alliance’s north-eastern frontier. But there could be challenges, particularly given uncertainty about the US role under an unpredictable Trump administration.

Authored by Christian Leuprecht, Joel Sokolsky, and Jayson Derow, this report dives deep into explaining the nature of Canada’s involvement in the region, its leadership role to date, and the responsibility that Canada has in providing concrete contributions to our regional allies.

“Canada should renew its commitment to the enhanced Forward Presence (eFP),” say the authors, “because it is in Canada’s strategic interest to do so, and because of the dilemma in which Canada, allies, and fellow NATO members would find themselves were Canada not to renew.”

With low risk, low cost, low domestic visibility, and high payoff among allies, the eFP Framework Nation commitment is a genuine Canadian international peacekeeping operation. According to the authors, contributing to the eFP is Canada’s way of paying into an insurance premium to maintain peace and stability in the region:

“Strategically, then, it is thus much more efficient and effective for Canada in the short- and medium-term to incur the financial and political cost of a modest contribution to reassure a NATO member ally.”

The decision to renew the mission comes in the context of continued pressure from the Trump administration for NATO allies to do more. Indeed, a recent letter from the White House to Prime Minister Trudeau “singled out Canada for underspending on defence.” While Canada may resist pressure from an otherwise unpopular president to spend more, we can make the case that Canada’s mission in Latvia demonstrates Canada’s contribution is about more than dollars and cents.

As well, Leuprecht, Sokolsky, and Derow suggest that the greatest threat to NATO and the eFP specifically is the possibility of US disengagement, a scenario made even more troubling by recent US behaviour in other regions.

The interdependence and interconnectedness of the modern world demands an alliance that stands and falls on its unity. The fundamental principles that comprise the foundation of such a relationship remain intact: the defence of shared values and interests. As the authors make clear, Canada has an important and enduring role in defending the Baltic member-states from possible Russian aggression.

To learn more about the past, present, and future of Canada’s commitment to NATO’s eFP in Latvia, read the full report here.

Dr. Joel J. Sokolsky is a Professor of Political Science at the Royal Military College of Canada. He is a Senior Fellow at the Queen’s University Centre for International and Defence Policy, a Research Affiliate at the Strategic Studies Program of the Massachusetts Institute of Technology and Senior Analyst with Wikistrat.com.

Jayson Derow is an 8-year veteran of the Canadian Armed Forces and a Research Analyst at the NATO Association of Canada. He will be pursuing a Master of Public Administration at Queen’s University in Fall 2018.