Will Taiwan choose China or choose the world? Its next presidential election will determine its future: J. Michael Cole in the South China Morning Post 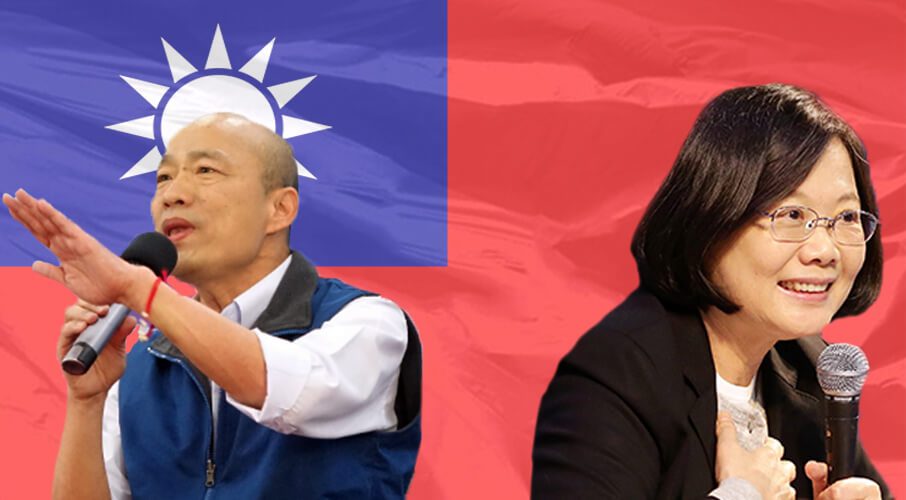 One candidate promises money and better relations with China. Another leans on progressive values and diversification. Their clash is likely to be highly acrimonious, and may well change the direction of the island, writes J. Michael Cole.

The contours of the battle for Taiwan’s presidency next January came into sharper focus on July 15 when Han Kuo-yu secured the opposition Kuomintang’s (KMT) candidacy in what is expected to be a heated election campaign against incumbent Tsai Ing-wen of the Taiwan-centric Democratic Progressive Party (DPP).

Han, 62, received a surprising 44.8 per cent of the votes collected by the KMT in the previous week, convincingly defeating Hon Hai Precision Industry founder Terry Gou by 17 percentage points and a handful of other aspirants. In early June, President Tsai, also 62, obtained her party’s nomination after defeating former premier William Lai Ching-te, her sole challenger in a bruising contest, by 8.2 percentage points.

With the selection of the candidates from Taiwan’s two main parties complete, the stage is now set for an acrimonious campaign to define the future of the island nation’s character, with implications for Taiwan’s relationship with China and the international community.

A populist with little governing experience who won the race for mayor of the southern port city of Kaohsiung in last November’s local elections, Han is regarded as an outlier within his own party. Flexible with the truth and prone to self-contradiction, Han has nevertheless harnessed the passions of a swathe of the population that has seemingly grown disillusioned with the elite-driven technocrats who have run the country, both in DPP and KMT administrations, over the years.

Popular with older voters and less affluent members of society, Han has also garnered support among local secret societies as well as the influential Huang Fu-hsing branch of the party, which comprises military veterans and their families.

Amid his rise, mainstream KMT members have only reluctantly embraced Han, initially supporting more establishment figures like Gou and Eric Chu Li-luan in the primaries. A number of party “princelings”, including Chiang Wan-an, grandson of former president Chiang Ching-kuo, have sought to distance themselves from Han, and more will likely follow. Others in the KMT, meanwhile, have been willing to ignore Han’s anti-establishment proclivities for the time being, and see in his sudden rise an opportunity to improve their party’s appeal following years of stagnation.

It is difficult to avoid drawing parallels between Han’s emergence and that of US President Donald Trump, who also successfully tapped into popular discontent and hijacked a rudderless party in the process. Should Han succeed in co-opting the KMT in similar fashion, the party that comes out at the end of this could be markedly different from what it is today – something that core members may not like.

Other than his repeated slogan that “things are terrible under the DPP administration” and that under his watch “people would make lots of money”, little is known about Han’s proposed policies, and quite possibly little more of substance will be proposed in the coming months.

Han also appears to be a favourite of Beijing, which after years of failed efforts to advance its political objectives towards Taiwan with mainstream counterparts in Taipei, now sees an opportunity to make progress on cross-strait relations with outlier politicians who are less inclined to toe the party line – and who may in fact feel less constrained by democratic rules.

Following Han’s election as mayor in November, Beijing-friendly traditional media in Taiwan, including a well-known conglomerate, as well as online new media and armies of netizens, launched a relentless propaganda campaign to engineer his spectacular rise and propel him to the KMT’s nomination for the presidency.

Han supporters have also initiated an unprecedentedly vicious campaign of intimidation against his detractors, resulting in several threats against political commentators, journalists, politicians in the green and blue camps and their families, as well as local businesses.

In this toxic environment, which threatens to exacerbate polarisation, Han has argued that such extreme elements are not among his supporters, and has refused to condemn such behaviour. (Arguably, many of the accounts that have participated in this systematic online bullying appear to live outside Taiwan, in places like Malaysia.) Such belligerence is expected to intensify as the elections approach, posing a threat to social stability in Taiwan.

Rampant disinformation targeting the Tsai administration, with evidence suggesting links to China’s United Front organs, has also raised the spectre of possible interference by Beijing in the elections to ensure that a candidate of its liking ascends to power. Han’s failure to come clean on the financial support for his campaign has fuelled such speculation.

Han has embraced the “1992 consensus” and will seek closer ties with China, which could engender more mass protests à la Sunflower Movement. Conversely, his opponent has staked her presidency on democratic promotion – helped by recent developments in Hong Kong – and deepened engagement with the international community. Han’s focus will be on the economy, which according to him should run through China; Tsai’s is based on the belief that diversification is key, even though cross-strait trade has remained vibrant despite headwinds in bilateral relations since 2016.

Unlike Han, Tsai’s base comprises the elite and young voters who seek a more progressive and globalised Taiwan. She enters the race somewhat weakened by her skirmish with Lai, in the wake of which conservative “deep green” elements have continued to assail her. Many of them seek to punish her for allowing her government to legalise same-sex marriage, a policy that Han has vowed to overturn if elected.

Tsai will also face possible retribution by conservative Christian churches, as well as retired civil servants who saw their pensions trimmed following necessary reforms to the pension system; all have rallied behind Han, highlighting the clash of values of generational divide that will animate this election (for example, about 80 per cent of Taiwan’s youth support marriage equality).

In the end, this election will determine the nature of the future Taiwan: one that, under Tsai, continues to seek space in the community of democracies while challenging an increasingly belligerent China, or one, under Han, that re-prioritises ties with China and fixates on money, at the inevitable cost of retrenchment in its involvement with the global liberal-democratic order.

J. Michael Cole is a Taipei-based senior fellow with the Global Taiwan Institute in Washington, DC, the Macdonald-Laurier Institute in Ottawa, Canada, and the Taiwan Studies Programme at the University of Nottingham, UK. His latest book, The End of the Illusion: Cross-Strait Relations Since 2016, was published earlier this month